Salmo salar, is a silvery slender fish. It looks like a trout, but has a slimmer tail root, fewer spots below the sideline, just as the gill grid rods on the front gill arch are rod-shaped, and not knot-shaped as in trout. The salmon changes appearance prior to spawning. The silver color disappears and it gets darker. The male develops a distinct jaw hook, and the body acquires a reddish tinge with black, red, reddish-brown and orange spots.

Salmon lives on both sides of the Atlantic. On the European continent, salmon are widespread from Portugal in the south to the White Sea in the north. Salmon are found in up to 100 rivers in Iceland and in a single river in South Greenland. In northeastern North America, the salmon’s southern border is near New York.

The salmon usually weighs 1-15 kilos. In rare cases, it can weigh over 20 kilos, and in many parts of the world it is bred intensively in aquaculture.

By salmon can also be meant the genus Salmo, which includes almost 50 species, including trout (Salmo trutta). Furthermore, there are different salmon species in the genus Pacific salmon.

Salmon is an anadromous fish. That means that it migrates from the sea to fresh water to spawn. The salmon usually returns to the stream where it has hatched. It has been shown to be the salmon’s ability to remember the smell of the stream in which it lived as a juvenile that enables it to return. Therefore, the salmon in the individual watercourses are approximately genetically isolated, because a salmon from one watercourse rarely mates with one from another. There are therefore different strains of salmon that over time have adapted to the specific conditions in the individual watercourses.

Salmon is one of the most valued edible fish. The orange to dark red flesh is rich in omega-3 fatty acids. It can be eaten raw, boiled, fried and smoked. 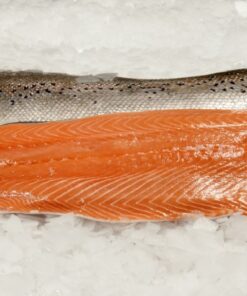